Craig was born in the small town of Nyssa, Oregon in 1952. He was the youngest of three children, and shortly after he was born, his family moved to Yerington, Nevada to run a laundromat. Craig loved to play sports and played baseball, basketball and football all through high school. His favorite sport was football, and he was captain of the football team his senior year when Yerington High School won the state championship.

After high school, Craig moved to Reno, Nevada and attended the University of Nevada Reno where he earned a bachelor’s degree in accounting. During his freshman year, Craig met the love of his life, Teresa. They married two and a half years later and had three beautiful children, Jenna, Alex and Janna. His children were his finest accomplishment. He so treasured being a father.

Craig ran his own CPA firm in Las Vegas for a number of years and then merged with Kafoury Armstrong and Co. CPA’s. He was a managing partner in the Las Vegas office until he was diagnosed with ALS in 2006.

Before his diagnosis, Craig loved to golf and travel with his beautiful wife. They had so many adventures together and shared countless memories of beautiful golf courses and new cities. He also belonged to the Bass Fisherman’s Club for 14 years. He would spend on Saturday each month fishing in various parts of Lake Mead. He was best known for the box sandwiches he would bring on these trips and everybody wanted to partner with him!

Most importantly, Craig loved his family and cherished them more than anything. He always put them first and worked so hard to provide the best for them.

Craig lost his battle with ALS in July of 2008, just two short years after his diagnosis. He was survived by his wife, Teresa, his son, Alex, and his daughter, Janna. He left this world before his two beautiful grandchildren, Jackson Craig and Makayla Mae, were born. While he’s not physically here with us anymore, we know he watches over us every single day and shares all of our experiences.

Tossin' Away ALS - Helping Others

We've been all over the news the last 36 hours!! Here's the story Heather Moore TV produced about us for those who missed it Monday night and Tuesday morning. Best four minutes of your day right here!Help us make a difference in the lives of some wonderful families... Register a team or just come hang out with us on Saturday. If you're unable to attend this year, consider making a donation and be a blessing to others. Register --> www.tossinawayals.com/registrationDonate --> www.gofundme.com/tossin-away-als 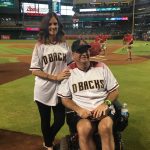